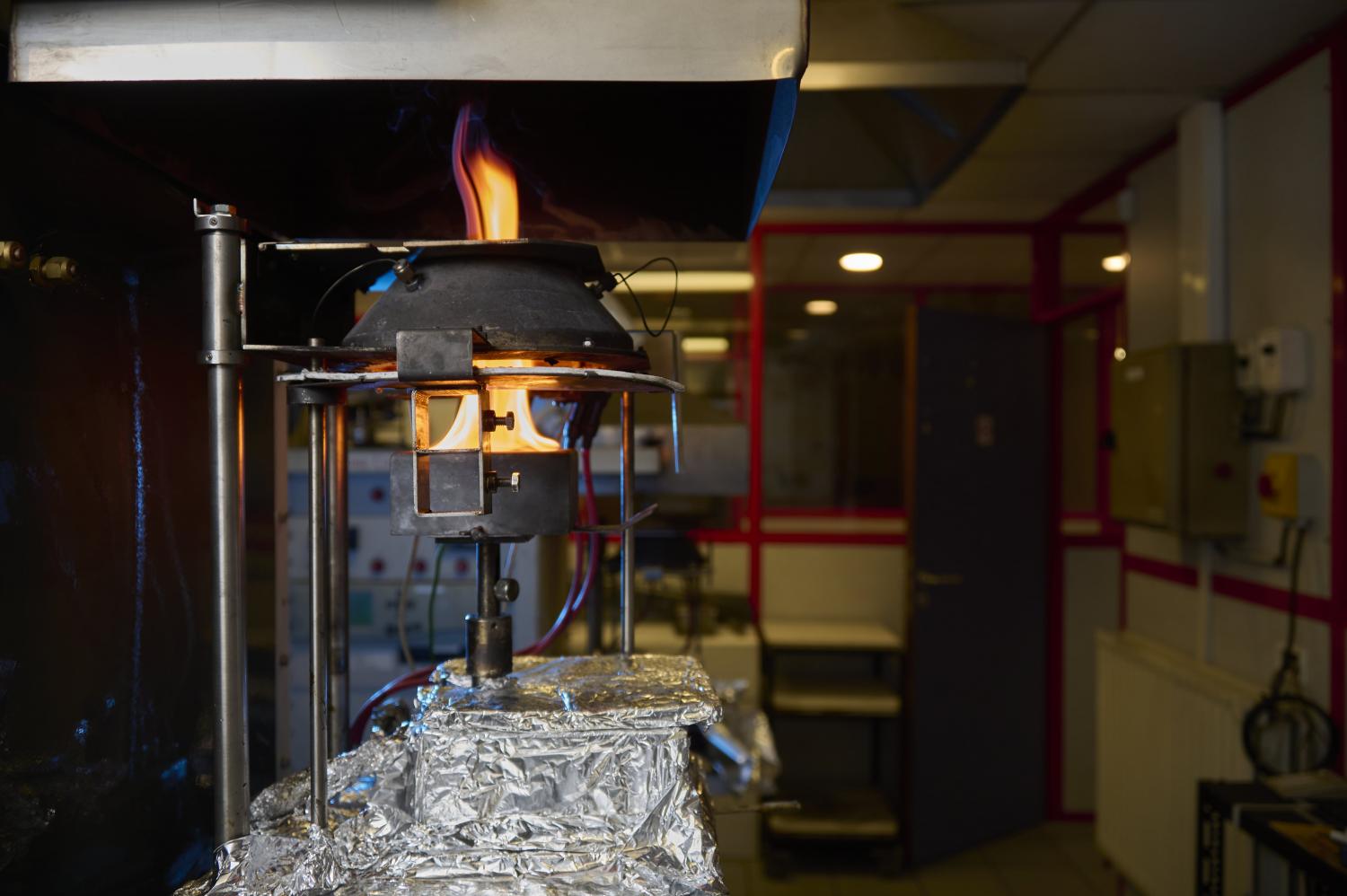 CREPIM - Material & Fire Test Expert- is the leading European Laboratories for the development and the approval of materials covered by fire regulations. Located in the heart of Europe, CREPIM tests and develops fire resistant formulas for companies working in the mass transportation sector such as railway, electrical and textile applications, in buildings electrical systems.

Also note that the test reports released by CREPIM are recognized worldwide:

EN 45545-2 features a certain number of critical tests, amongst them:

Principle: Specimens are held in a vertical orientation and exposed to a gas fired radiant panel and a pilot flame. The hot end of the specimen receives a radiant heat flux of 50, 5 kW/m² and this gradually decreases to a level of 1.2 kW/ m² at the cool end. Although the pilot flame does not impinge on the surface of the specimen it will act as an ignition source for any volatile gases produced by the product. During the course of the fire test the maximum flame travel along the specimen is recorded.

The following parameter is then determined: Critical Heat Flux at Extinguishment (C.F.E.) – a measure of how far the flames have travelled across the surface of the specimen

The Cone Calorimeter was developed in the USA by NIST and is used to determine the rate at which heat is evolved from a fire involving a material. The apparatus uses the principle of oxygen consumption calorimetry to determine the rate of heat release, maximum heat release and the total heat release to enable modeling techniques to be used to predict time to flashover thus assessing one parameter which contributes to the overall hazard of a material.

Principle: The apparatus is designed to measure the response in either a vertical or horizontal position and is based on the premise that for a range of materials, the net heat of combustion is proportional to the amount of oxygen required for combustion. A small sample of material is exposed to the irradiance generated by a truncated cone heater.

Decomposition gases generated by the heater are ignited by a spark and the resultant combustion gases are drawn through an exhaust system containing various instrumentation. Continuous measurement of oxygen, carbon monoxide and carbon dioxide together with the exhaust flow rate allow the determination of heat release with time. A range of exposure conditions is used, from 10 kW/m² to 100 kW/m². In both orientations, the specimen is mounted on a load cell to measure mass loss which can itself be used to determine heat release rate. Smoke development and temperatures can also be monitored in the exhaust duct.

The value which is required in the European standard is the MARHE which is directly linked to the heat rate release.

Principle: The aim of this fire test method is to expose a material to specified thermal conditions of pyrolysis and combustion in a continuous procedure.

The change in optical density of the smoke produced when dispersed within a fixed volume of air is recorded throughout the period of test.The resulting smoke density/time curve is used to calculate the specific optical density figures, which can be used to determine VOF4, Ds4min or Dsmax as required for the specific product function. The test is carried out in a chamber of 0.5m3 in volume.

The specimen sits inside a small metal holder with one face left exposed (this ensures that it is a surface test only).

The container is then placed inside the chamber below a cone heater in a horizontal position. The irradiance level of the cone heater is set to one of the following levels, depending on the specific product function:

Principle: This test requirement can be conducted in conjunction with the smoke density analysis as described above.

The sampling of fumes is made during the testing of each of the three specimens tested above, at 4- and 8-minutes test duration. The analysis of each relevant gas is made by an IRTF apparatus. The concentration of each of the following toxic gases is recorded and compared to relevant reference values in order to determine the CTI value (the magnitude of the reference values is based on the danger posed from the gas in question):

5/7 NFX 70-100, Toxic gas emission with is a mass based toxic gas analysis method. The test standard allows the measurement of many different toxic gases. For F rating classification in accordance with NF F 16-101, the gases which are analyzed are as follows:

Principle: The fire test is conducted within a tube furnace where the temperature is generally 600°C. For wire application, the temperature is 800°C. Toxic fume emission testing is then carried out in triplicate and the average of these results is used to calculate the “CTI” Value. The collection/measurement of toxic fumes takes place throughout the 20 minutes test duration. The toxic fume emission is expressed in milligrams per gram of material, on the assumption that the mass of the test piece is 1g

This Part of ISO 4589 specifies methods for determining the minimum concentration of oxygen, in admixture with nitrogen that will support combustion of small vertical test specimens under specified test conditions. The fire test is performed at an ambient temperature of 23°C ± 2°C. The results are defined as oxygen index values define as LOI. Principle: A small test specimen is supported vertically in a mixture of oxygen and nitrogen flowing upwards through a transparent chimney. The upper end of the specimen is ignited, and the subsequent burning behavior of the specimen is observed to compare the period for which the burning continues, or the length of the specimen burnt, with specified limits for such burning. By testing a series of specimens in different oxygen concentrations, the minimum oxygen concentration is determined.